OK, I said that Bourke Street Bakery would be my last Sydney post for a while, but I lied. I couldn’t not share with you all the wonderful lunch prepared by Adriano Matteoni (of Clipper and Clover fame). It’s almost unnecessary to say that the food was all amazing – of course! – and we were all completely sated.

L & R: The green of beans with roast garlic and mashed peas with basil and lemon zest.

L: Beef “almost-carpaccio”, the makings of a panzanella salad. R: A vinaigrette. 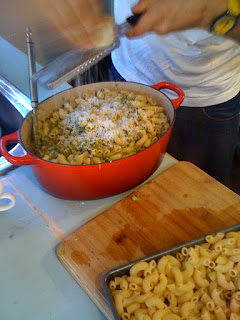 L: The mashed peas were added to elbow macaroni and a hefty amount of parmesan – so smple, yet so delicious! R: The panzanella salad takes shape. 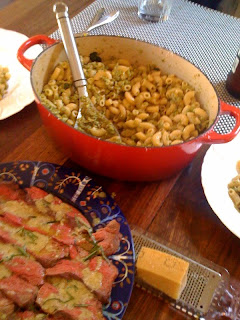 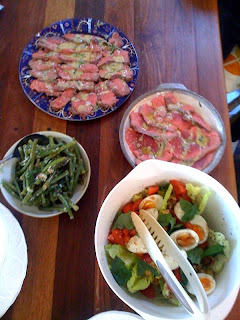 Adriano made me a latte on his little home-sized Giotto. The consummate professional even at home, check out the fern action!

Thanks to Adriano and Kana for a wonderful afternoon!

Earlier this week, we celebrated Independence Day at work (one of our colleagues is a Kalamazoo, MI native). I’m not sure I’ve had such an unhealthy lunch in a while. Oh wait, who am I kidding, I went to McDonald’s for lunch a couple of weeks ago. Anyway, it was July the 5th, but it would still have been July the 4th somewhere in the USA.

My BBQ pork ribs. I did a test batch earlier in the week, but this one turned out much better. 5 hours at 120C in the oven will do that.

And the divine Miss M’s peanut butter cupcakes. Yup, that’s a wedge of Reese’s Pieces on top. And there was a whole one on the base of the cupcake. *droooool*

First of all I’d like to thank and congratulate Penny for coming up with such an innovative way for us to all share the joy of a noodle party, without having to eat them all ourselves, or leave out own homes, for that matter!

So it all started pretty well. I came across a hand-pulled noodle recipe, which wasn’t udon, but looked pretty good. The ingredients were pretty much:

Following the video, I rested it for 20 minutes, kneaded it until smooth, rested it for another five minutes and kneaded it again. Before the final kneading, I added about 2 tablespoons of white miso, and the same quantity of mashed pumpkin. In retrospect, the pumpkin was a big mistake. Far too watery, so I had to keep adding flour to compensate for the excess moisture. This was the beginning of the FAIL.

To cut a long, arduous, knead-y story short, the resulting dough was far too tight to be stretched, and I resorted to pulling out the pasta machine and super-laminating the dough with ever-increasing amounts of flour.

Not wanting to make ramen/spaghetti sized noodles, I continued on my lazy option, and went for fettucine-shaped noodles. If I had an obaasan (Japanese grandmother) she would have been rather upset. Although if I had an obaasan this travesty of noodle FAIL would never have happened! Seeing as I don’t, I persevered.

And boiled the noodles for about 3 minutes.

In the meantime, I had been simmering shiitake mushrooms and ginger for about two hours, to make a dashi broth.

It was lacking in flavour, so I added about 2 teaspoons of salt. Oh, by the way, that’s a quail egg I’m poaching in the soup ladle there.

My friend Mr R came around to help evaluate my Japanese experiment, which made me a little nervous because he is something of a Nihon-ophile, and had recently returned from Japan with tales of tonkotsu ramen and tonkatsu made from pork ribs, but I had caveated the exercise as experimentation, so he was quite gracious in his reception.

Time to plate up. Add noodles to broth (to keep them from sticking together as you assemble the other ingredients).

For my toppings, I included some silken tofu, shiitake mushrooms from the broth, grilled eggplant and snow peas. Mr R didn’t like quail’s eggs, so I had a poached one on mine, but omitted it from his.

Even though it was a strange fusion of fettucine and Japanese flavours, it all came together rather well.

Though next time, I’ll omit the pumpkin from the noodle, and add more miso. While the noodle had some flavour, it wasn’t nearly enough, considering I had left the broth quite simple (read bland) to compensate for flavoursome noodles.

I’m going to play around with putting other things in my noodles – the next candidate will be harissa!

You can find everyone links to everyone else’s noodles at Jeroxie.com!

We stopped in at this cooking school on the main road through Patong (the back road, not the beach drag) because we had an hour and a half to kill before the movie we were going to see, and needed to get dinner anyway. Seeing as they had express classes, where you cook two dishes in 45 minutes, it was pretty serendipitous.

I have to say up front, the express classes probably aren’t the best, especially if you want to learn more than a process. All of the prep work is done for you, which speeds things up, but takes away the learning opportunities – asking questions about ingredients and learning prep tricks is half the fun of a cooking class I think – and it wasn’t much more than a hands-on version of watching a cooking show. That being said, it was still fun.

Mr N (seen above) cooked a green chicken curry, which was tasty, but a little too sweet for my liking. I should stress here that it wasn’t his fault, as you’re pretty much coached through exactly how much of each ingredient to use, so the result is pretty uniform. The recipes are just need some refining. The pad Thai Mr N also made was OK, but surprisingly had no tamarind in it at all, and the egg was fried separately to the rest of the dish, and not incorporated into the noodles. Weird. Mr N was also quite sure that the green curry was the source of his gastrointestinal problems for the next couple of days, but we ate a lot of stuff on holiday, so it’s hard to be sure.

I made the tom yum goong, which was pretty uninspired – we just used a tom yum paste, and the prawns weren’t of great quality – to the point I didn’t even take a photo of it. I also made a pad see-ewe, which was not bad, but again, I followed the recipe, and it was a bit too sweet for me.

I think that the longer classes would be more educational, as one includes a market visit, so I’d presume you get to do all the prep yourself. I think next time I do a Thai cooking class, I’m definitely going to learn to make curry paste from scratch.
This post should have been up a couple of months ago, but such is the backlog of photography which needs wordage applied!

It was a warm summer’s eve, so we started with a corn gazpacho, accompanied by avocado and cheese quesadillas.

I reprised the baked peach in filo nests for dessert, only this time topping with Sara Lee Toffee Crunch ice cream instead of the pistachio ricotta yoghurt.

From time to time, I go over to my grandma’s place, where my mother and my aunts will have cooked up some Vietnamese or Chinese feast, which usually involves copious amounts of one or two dishes. This time it was cha gio (Vietnamese spring rolls) and grilled beef wrapped in betel leaf. Both are eaten wrapped in lettuce leaves, along with some cucumber, rice vermicelli and various herbs. There were two dipping sauces, the nuoc mam cham (fish sauce prepared with lemon juice and sugar), or a more pungent, fermented fish sauce which my family just referred to as mam. 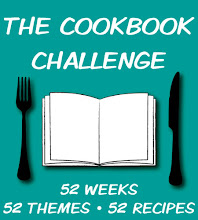 This year I was lucky enough to be invited to a friend’s house for an awesome Thanksgiving dinner. The spread was pretty amazing; turkey, candied sweet potato, cornbread, chili sans carne (large vegetarian contingent) and roast vegies. Om nom nom nom. This was followed up with a hefty collection of American confectionery, Krispy Kreme donuts, and not only pumpkin, but also blueberry pie!! Sugar overload, and rolling to the couch.