Thank you all for taking the time to read and comment on my blog. It’s been a wonderful part of my life in the past year or so; through it I’ve deepened my knowledge and love of food, and met a wonderful group of kindred souls. I’ve learned, I’ve grown, and I’ve laughed. But most of all, I’ve eaten. Boy, have I eaten!

I’ll be taking a little break from blogging, so I can focus on some other things in my life. It won’t be long, but I thought I’d just let you know. Hopefully when I return, it will be with a blog that has a bit more personality than the standard Blogger template I’ve been using up till now, too!

So look forward to a new look half-eaten blog soon. Just not quite yet.

I’m just testing something for an upcoming project – stay tuned – so please ignore this post. Apologies for cluttering up your feed readers!

Until my recent fleeting visit to Singapore, I’d only ever tried bak ku teh once. It was in Melbourne, and I wasn’t very impressed. Perhaps when it said ‘herbal soup’ I didn’t quite expect it to be those Chinese herbs which my mother used to force me to drink when I was sick as a child. In case you’re wondering, I still take Chinese medicines when I’m sick, but thankfully the medicines my sister prescribes are mostly in pill or powder form now. Ah, generational change.

So after a night of drinking with my cousin in Singapore, I was a little hesitant when he and his friends were all excited about going out for bak ku teh at their local, the way we’d grab a souvlaki here in Australia on the way home. I mean, I was in Singapore, where’s the char kway teow? Surely that’s the greasy drunk’s food of choice? My cousin explained that this particular bak ku teh place didn’t do the traditional, medicinal style bak ku teh, but rather a more straight pork soup, dosed with loads of white pepper. So I went with it, even though my body was craving the oily goodness only char kway teow could assuage. When in Singapore, right? 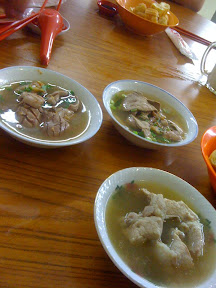 The bak ku teh came out in little bowls, with the classic pork rib, as well as a few other offal-type bowls which I was most complicit in ordering. From left to right: pork rib; pork kidney; pork liver. 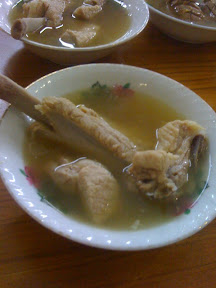 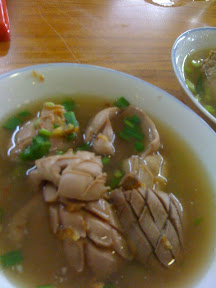 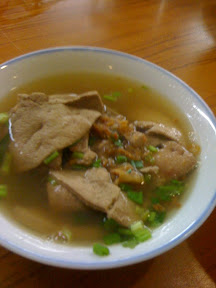 There was also some marinated dried tofu skin, and some salty cabbage dish which was not so great. 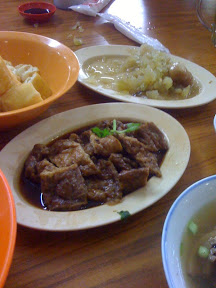 To accompany these dishes, you could either have the traditional steamed rice, or some rice vermicelli. Being a bak ku teh novice, I stuck to the rice. 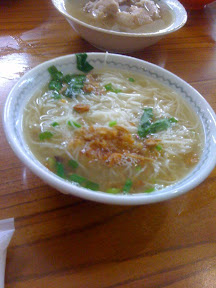 While I would still probably have preferred a char kway teow, I have to admit the bak ku teh thing is quite satisfying after a night on the booze. In a similar way to the hangover food of the gods, pho, it simultaneously replenishes mineral salts and rehydrates. Yeah, that’s what I tell myself. Let it go. The other great thing about the bak ku teh experience is the fact you sit down as a group of drunks and share a communal meal together. And when it comes down to it, drinking’s all about bonding, right? 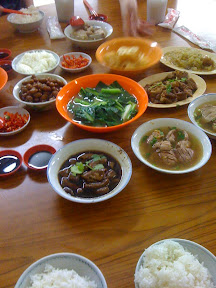 The chips are good!

Welcome to WordPress. This is your first post. Edit or delete it, then start blogging!

This is me half-way through eating a whole packet of tim tams (creme caramel sweet surrender) on my own, between lunch time and close of business today.

So I’ve been a sporadic blogger for about five years now. And I’ve been a lover of food for, oh, about 29 and a half years…

In any case, a sizeable amount of my life revolves around food, and I’m unashamedly passionate about it. I’m not sure I would classify myself as a ‘foodie’, because that seems to have certain connotations of food elitism about it, and while I do enjoy ‘fine food’, I can (all too) often be found drunk at 3am consuming cheeseburgers from McDonald’s, or a souvlaki from some joint which happens to be open at that hour.

So what’s my take on things, where’s my gimmick, what’s my bent? I’m not really a patient guy. And I’m a little forgetful. So while many of my friends are organised and dedicated documenters of the culinary arts, with their SLRs and attention to detail, I prefer to dig in and more often than not, the camera I’ll use will be in my phone, because who can be bothered carrying one more gadget these days, really? (If you’re a girl or a ‘metrosexual’ with and attendant bag, woo for you – me, I’m most often a pockets man.)

So here goes – expect sometimes poorly photographed photos of food which has already been attacked. Expect short, direct appraisals of the food. That’s what I’m about. For now, until I change my mind, anyway.