See my original post on Chowhound. I liked it so much I went back recently for brunch. Mr N had scrambled eggs. I had the laksa lemak (which was actually a bit TOO spicy for my liking). I can handle my spice, so people be warned!

You know how you add your old high school or primary school friends on facebook, and then stalk them a bit, looking at their photos, maybe send them a message or two, and comment on a few of their status updates? Then you pretty much ignore them until they post a link to an interesting looking video. Then you ignore them again. Probably for good.

Life is a little more in your face, like when you run into your old best friend from primary school at the banquet of one of your close friends from uni’s sister’s wedding. You know how it is, right? Right. So I ran into Mr D at said banquet, and we promised that we’d catch up soon. It was another month or two in the making, and was of course facilitated by facebook messaging, but nonetheless we caught up. At Chowhound, a little gem of a place in Northcote, one of quite a few which seem to have sprung up in the last couple of years, since I used to live there.

Chowhound was set up by some of the former owners of Nudel Bar in the city, with a similar mish-mash of Asian and European dishes on their menu. The interiors are warm and relaxed, and I love a place that has booths along the wall. There’s a cute little courtyard out the back too, but it was too cold that day to entertain that notion. Service was very friendly, as well as prompt and unobtrusive.

I had the Spaetzli noodles, tossed with caraway seeds, with lamb goulash. It was such a perfectly hearty dish, which was just what I was after. The caraway seeds were a clever touch too, giving the Spaetzli a touch of fancy, making them more than just the accompaniment to the rich, lusty paprika-driven stew.

Mr D was in the mood for a lighter option, and had the green tea noodles with salmon and avocado. He said it’s one of his favourite dishes on the menu. The serve may look a little small, but it is from the ‘dishes to share’ section of the menu, so that’s to be expected. I’m not quite sure how easy noodles would be to share, however.

All in all, chowhound is a pretty laid back and unpretentious place, but it still serves up some fine and interesting food. I’d recommend taking your family there – there certainly were lots of them there that afternoon – the menu is quite diverse, so there should be something for everyone. Prices are mid-range. Expect to pay between $15-25 for a main.

Tucked away in the backstreets of Westgarth along the Hurstbridge train line, is this little house-cum-cafe, which has on-and-off been a local institution for at least a decade. I met up with some friends here for brunch a while ago – one of them used to work there in an earlier, hippier incarnation, years and years ago. The current owners have been there a little over six months, and it’s certainly no hippie affair now, though the vibe and the service is certainly still warm and friendly.

Ms B and Ms L both decided to have the ‘Simply Foxy’ – a poached egg with avocado, tomato and Mungali Creek Feta on sourdough. Both enjoyed it immensely, though I’d have to say the combination of elements seemed a little on the dry side for me. In my mind, sourdough toast often needs a lot of lubricating. 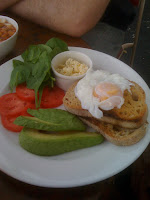 Mr T – who I’m sure will appreciate that his name is shortened such, despite his lack of chunky jewellery – opted for the scrambled eggs, with a side of slow-cooked baked beans. I’m not a huge fan of baked beans, but on a brisk morning, they looked and smelled very inviting. 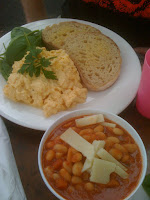 I had the ‘Sun’s Secret’, roasted tempeh and a fried egg on Crumb’s pumpkin sourdough with paprika relish, tahini and a squeeze of fresh lemon. Unfortunately, the tempeh was roasted a bit too much, rendering it dry and crunchy rather than soft and bean-like. Possibly bigger chunks would have been a good idea. Thankfully the paprika relish and tahini softened the dish. 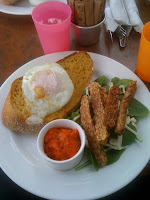 I don’t usually have coffee, but it was a big day, so I did for once. Like many new cafes, Foxy Brown seems to be quite serious about its coffee (in fact, the full name of the place is Foxy Brown Espresso) offering single origin coffee with unhomogenised milk, and for those of you who know, or need to know – I personally have no idea – it’s made on a Synchro espresso machine.

All in all, it’s a pleasant place for brunch, though overall, I think the food was a little on the dry side. More sauces – or butter – please!