OK, so the Hong Kong #fatty posts are done,but believe it or not, my blog is still on holiday! Next up, Penang. Sans @eatnik, I was on a solo eating mission, though I did have a local guide, thanks to @RippingYan. Her friend Mr A had graciously offered to show me around Penang, which essentially just meant a culinary tour. We’ll get to that later, but on my first morning in Penang, I ventured out on my own.

I had been curious about Assam laksa for a while, mostly because I’d been told that there pretty much aren’t any good versions of it in Melbourne, and well, when you’re travelling overseas, you should always try to eat local food, or at least food you can’t get back home. Ugh, I’m such a food tourist. At least it’s better than being a sex tourist, I guess. Though the likelihood of contracting a disease is often as high.

Anyway, I did a little research online about where to find the best Assam laksa in Penang, and apparently I needed to go out to Air Itam, which felt a little far to accomplish in a morning, so instead I went to reportedly the best place in Georgetown, Joo Hooi cafe. 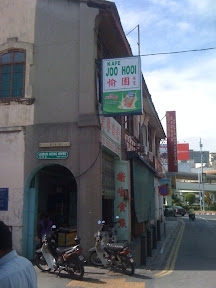 The set up of this cafe is a lot like a mini hawker centre. There are various little specialty carts down one side of the cafe, each run by a separate owner, and communal seats and booths inside the cafe itself. It’s sort of like a food cart co-operative. 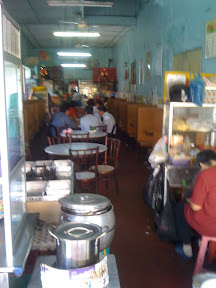 I sat down, and a gorgeous little old lady came over to ask what I’d like to eat. It was at this moment I was so glad I could speak Cantonese. Not that she didn’t speak some English, but because it was early in the day, and because she didn’t have many customers to serve – she seemed to be in charge of drinks and expediting orders to the various food cart owners – she sat down and started chatting to me about Penang and my holiday plans. She seemed amused when I told her I was pretty much there just to eat. But with the tourists who started to file in later on, I guess she’s seen it all before.

I ordered the Assam laksa, as that’s what the place is known for. Interestingly, most of the ‘cafes’ in Penang have this sort of set up, with specialist cart vendors, but each one tends to have one or two carts that are well renowned for being exceptionally good. It makes me wonder what the other cart owners in the joint think. Are they glad to have a star in their midst to draw the crowds, or is it a matter of annoyance, that everyone who goes there just wants the famous dish?

Anyway, for those of you who were expecting a big bowl of coconut curry soup, Assam laksa is not like that. It’s found in various places around Malaysia, but Penang seems to be the most famous for it. It’s called Assam laksa because of the use of tamarind in the soup (Asam being Malay for tamarind). The other main element in the soup is mackerel (though I was told that sometimes sardines are used). The result is an intense soup that is both tangy and salty; oh, and it’s fishy, so if you don’t like that, steer clear! This is balanced out with some lemongrass, galangal, fresh pineapple and mint, and given a bit of lift with cucumber, lettuce and red onion. The garnish is some torch ginger flower, and in the spoon is a molasses-like sweet prawn paste called petis udang. 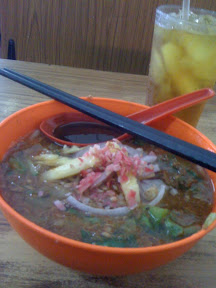 The flavours of this laksa are heady and intense, but all the fresh elements keep it from being too fishy or too heavy. The noodles also weren’t what I was expecting, being a medium thick rice noodle – like those used for Vietnamese bun bo Hue instead of the Hokkien noodle/rice vermicelli combination normally found in a curry laksa (which incidentally, is known in Penang as curry mee). 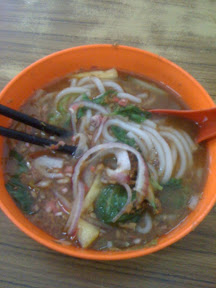 The one strange thing about this laksa is that there aren’t really any chunky elements to it. There’s not prawn, or fish cake, or tofu. All the protein – the mackerel – is part of the soup, so in a way, it’s like eating a really soupy spaghetti Bolognese! Well, a fishy Bolognese. Nonetheless, I really loved this laksa, even though it wasn’t quite what I was expecting. 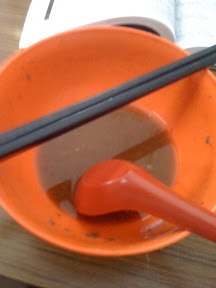 I came back a second time a few days later, and the same little old lady was working. I have a feeling she works there every day. It was mid-afternoon this time, and again it wasn’t so busy. We chatted again about the places I’d been to in the mean time, and she suggested a few places I should try. I felt bad, because I knew I wouldn’t get to them – Mr A is the consummate food tour guide of Penang, you see – but I smiled and thanked her for the info anyway.

She made another recommendation as to what I should drink. I’m not sure exactly what it was in the end, but she described it as a sour fruit drink, assuring me it was very refreshing and perfect for the mid-afternoon heat. Deferring to her local expert knowledge, I of course agreed. I think it was some sort of under-ripe or pickled guava drink? It had the slight astringent taste that you get from guava or persimmons, and true to her word, it was most refreshing. Does anyone (maybe Malaysian) know what this drink might be? 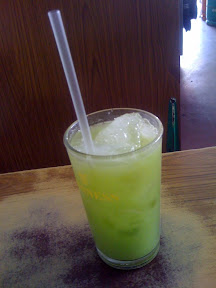 I’d been on a bit of a mission in Penang. My research goal was Char Kway Teow. And while this wasn’t the best I had in Penang – more on that later – it was certainly good. Loads of prawns and Chinese sausage, and with a good amount of wok hei – that charred flavour, known as the ‘breath’ of the wok, which is usually seen as a hallmark of anything that’s been stir-fried well – the downfall here was that the soy used was a bit too sweet. Still, none too shabby! 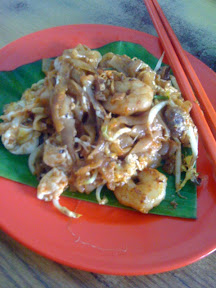