G/F 109 Hennessey Rd (supposedly, but I remember it being on Jaffe)

We were supposed to be hunting for congee. The first place we stopped in at didn’t have any. Apparently my eyesight is so bad that I confuse pictures of bowls of rice noodles for pictures of bowls of congee. I still maintain that the pictures were rather faded, so the contrast was completely lacking. And what is congee if not a rice noodle soup without contrast… hrm, I might have to rethink that one.

Anyway, this time around, we did find a place that had congee, but for some reason only beef and beef offal-based congees. @alexlobov was after fish congee, so that was another fail on my part. Somehow, despite him having lived in the area for a couple of months, it fell to me to find a congee joint. I guess I did have the advantage of being able to (sort of) read Chinese, but clearly that doesn’t help.

Anyway, we gave up, and settled on noodles. I chose the beef offal noodles, naturally. 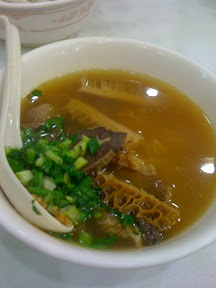 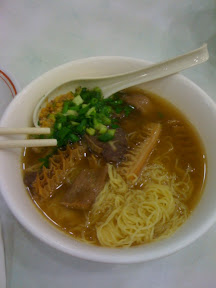 Check out those righteous chunks of tripe! And less excitingly, the slices of liver were pretty good too. Again, I need to comment on the fineness of the egg noodles in Hong Kong. Seriously, it’s like they have next generation technology which isn’t available in Australia! I might have to learn to make them myself.
@eatnik had the ‘fish noodles’, which were noodles made out of fish paste. It’s like having fish balls, and noodles, but in one! Genius! It was also one of the shop’s specialties. She also got rather excited when she found there was lettuce in the soup. As you’ll come to see over the course of the remaining #fatty posts, vegetables can be a little rare in Hong Kong fast food. 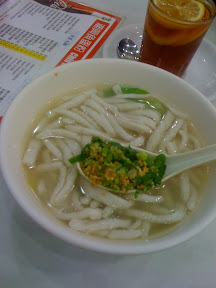 These ‘noodles’ were great. They had a light, springy texture, and tasted fishy without being too fishy. Kinda like a good fishball. But more about good fishballs later…

@alexlobov had the wonton noodles. He didn’t seem all that impressed, but then he seems to compare all wonton noodles against the might of Tsim Chai Kee. Again, more about that later. 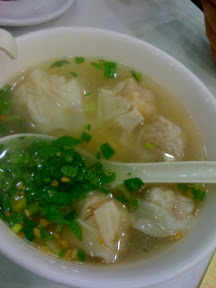 As you can see, I liked my beef offal noodles… a lot. 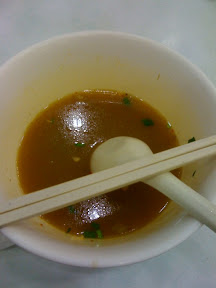