Char Siu House is little Chinese restaurant, of the primarily Hong Kong BBQ ilk, in Errol St, North Melbourne. I used to live around the corner from here in 1996 when I first moved to Melbourne, and it was a bakery back then, I believe. But the times they a-change, and bread is replaced by pork. And chicken. And duck. So who’s complaining, really? Interestingly, Fungs Asian Food and Sushi Bar, the local Chinese takeaway joint in 1996, is still open and doing remarkably well. I remember their food being pretty horrible, but it’s been over a decade, so perhaps things changed there, too.

I stopped in at Char Siu House for lunch a while back. The ladies who run the place are lovely, even if there’s a bit of a Fawlty Towers-style feel to the way they yell things out to one another. But that adds to the charm of the place for me. It helps that I can speak Cantonese, too, I think. I don’t worry about what they’re saying, because I know it’s pertaining to the couple on the next table’s char kway teow. This time around, I sampled the BBQ hanging in the glass case at the front of the restaurant. 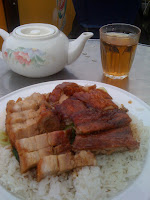 Roast duck and roast pork (not char siu, but the other kind, the belly pork with the salty, crispy crackling) on rice.The duck was nice and gamey, though a touch on t he salty side. The crackling on that pork was wonderfully crunchy, and the pork was fatty enough to make me feel a tad guilty. Then I got over and shoveled in the next mouthful. The servings are generous, though it seemed a little stingy on the cursory bok choy (underneath the mounds of meat in that photo). Chinese tea is free, as in all good Hong Kong BBQ joints.

While this place isn’t up to City BBQ or Rose Garden standards, it’s decent, and sometimes you just need a hit of meat with animal skin on it.